Maybe it had to do with the circumstances. Maybe it was just in my head. I dunno. But it didn’t go well. Her eyes seemed too large, her structure too bony. I recall the vibe as uncomfortable, even tense. Her color too. And her teeth. Rougher than usual. But it was just me I’m sure. I’m a stickler for these things. Hygiene. Something just smelled wrong. No. me. All me. This is pathetic. It was my issue, not hers. I really can’t blame her for this. Not even if I wished too.

Note to myself: Do not mess with the alley cat who sits at your door. It’s her door now. Don’t mess with her when she sits in your driveway. It’s her driveway now. Don’t look her in the eye. Never look her in the eye. Look down at all times. Don’t shout or make loud noises or pretend to be on the phone and barge through. That won’t work. She won’t budge. And please don’t tell your neighbors not to feed her. She’s knows you told them. And she doesn’t like it. And she’s coming after you. So just sit and wait patiently till she leaves or just request the security guard for help (and just take his sarcasm and judgement in your stride) or pray. Praying is good for the soul and for the cat and for passing time when you’re stuck outside your house cause some goddaamn alley cat has decided to perch herself and her litter in front of your door and its not looking like she’s going to move. She’s the boss. You’re the kitten. Darwin should’ve said that. But he was scared as shit.

I’ve said too much already. I really have.

But then again…well its a bit like therapy this talk. Read it like charity maybe. Charity for the weak and dribbly feline phobic who don’t think much of cat videos and would rather have them banned if they could.

See, there I go again. Fear turns to hatred turns back to fear turns to tail between my legs and I wait another ten minutes for her to vacate my welcome home mat. That’s my mat man. And she’s not welcome. We’re territorial beings, all of us, and I’m losing mine to an alley cat. And I’m getting angry. Or I’m probably just scared. Did I mention she has a litter now?

Ok so a little context might help here. My new house was and is an ideal pad for a young man like me. Sufficient ventilation and walls that absorb 80% sound. My 90 year old neighbor screams only on new years night every year and the rent is…well fuck that. But he’s a good man, my neighbor. A man of honor and degree and pedigree but with little practical sense. Why he chooses to feed this alley cat is beyond my rational comprehension. But he does and so she stays. On my welcome mat. I did mention that already.

My attempts at solving this unfortunate situation have proved mostly unsuccessful. I began with confidence, hoping that my relatively larger frame (with respect to the cat that is. I am relatively skinny in human terms, which could be the source of the problem here) would be enough to express my strict no house-guest policy. But that didn’t help. Apparently, she’s a pro at this game. And my rookie attempt proved hardly menacing. So I wait. I wait for her to get up and go somewhere. That’s right. I wait for the cat to get bored to enter my house everyday. It’s an interesting arrangement.

I once tried making a noise to scare her off. It was a loud ‘aaaah’ or ‘wwwwoooooh’, I can’t remember correctly. That because my howl was soon drowned by her crystal clear snarl which when merged with my pubescent shriek didn’t leave much to imagination. She’s a pro I told you. So I wait. I wait for her to get bored and leave so I can enter my house. I’ve taken quite a few long walks lately. Nice locality, mine is.

The only time I did make some partial headway was more of an accident than a thought out strategy. See, with most of my previous attempts failing, I had developed the habit of poking my head into the corridor before walking in altogether. It saved me time and effort and a few remaining scraps of dignity. And somewhere I liked the suspense of a cat free Friday. Ah, what a Friday that was.

But this time, I happened to be on the phone. And the conversation was animated. And I was sweaty after a jog. And in all the confusion I forgot my head bobbing ritual and jogged in, one hand on the phone, the other on my hip, with the confidence of a man. A real man. It seemed to confuse her, this ungainly display of testosterone. It threw her off perhaps. But somewhere, the combination of sweat, my loud curses and general post- jog swagger convinced her enough to vacate my mat in a hurry. I realized this feat only a few minutes later. But by then it was too late.

I’d messed with the system. And I was going to pay.

Now the thing about cats is (and I can claim to have thought a bit on this subject), that they’re not very expressive, yet they are very receptive. My cat, she seemed to have taken this trouncing a little too personally. For the next few days I found her sitting at my door for much longer, as if to compensate for that one off defeat. My walks became longer. The prayers harder. She hissed and huffed with vengeance, her tail straight – as if a soldier waiting for instruction. I’d rather not describe it anymore.

But the truth was that I’d pressed a nerve. A raw beastly nerve. There was going to be blood. And it wasn’t going to be hers.

Little did I know that she wasn’t thinking about mine either.

I was taking an early morning flight the next day, so I turned in relatively early. The extra long walk did help me build up an appetite and with the help of some good karma and probably an innocent mouse, I was back in my bed before ten with just enough time to get a few hours of sleep and forget about this matter altogether.

I don’t know about you, but I don’t like early morning flights. It’s unnatural to get up at 4am. The bowels never work no matter how well you plan. And yet, you’re still hungry. And you can’t have coffee ’cause that speeds up things and well certain people have a certain kind of relationship with the throne. I do. And 4am mornings are not good on the throne. Anyway, that apart, I did somehow manage to drag myself out of bed, into the shower, and out the living room with my suitcase. I was at the door, but somehow things just didn’t feel right. I know, I know, you’re thinking its the bowels again. I did too, but it wasn’t that. There was churning in the stomach sure, but these were encounters of a different kind. And I’m generally good with my gut. Yes, even a full one. And this just seemed like one of those days.

I mustered whatever courage I could find and opened the door, this time using the head bob routine from the inside. I just wanted to avoid any trouble. The hallway was clear. There was no cat. No sound. No light. I was even slightly offended.

For about three seconds that is.

You see, cats are not ordinary creatures. They’re brighter than most I’ve met. They see things, they feel things, they don’t show as much. You can never tell what they’re scheming. And she, she was at the peak of this act. The o general! The city ruffian with a freshly bruised ego. I told you there would be blood.

There was. The blood of a half eaten pigeon. Sprawled on my new welcome mat. Placed artistically with odd balls of fur and tad few many whiskers. On my new green welcome mat. The contrast just made the colors pop.

It was not the fact that the bird was dead or that it was half its frame, but that it was placed there for me, just me, to see, as if to signal something. Something deep. Something dark. Something dangerous. The garbage man told me to think of it as an act of kindness . That she only wanted to share her food with me. A truce he implied. But I laugh at his innocence. I pity him. This was no truce. This was a threat, abet a skillfully veiled one, but it was a threat no doubt. A message to keep my distance, to fall in line, to purr. To really fffin purr. No doubts about it. This was no random act of kindness. It was a well worked out game play, the work of a mastermind, the menace that only went so far. An offer, you could say, that I just couldn’t refuse.

It was only natural then. I dropped my head and called her Vito.

But she, she just shrugged and walked away.

Post Script: With our hierarchy now clear, we seem to have reached a mutual arrangement of sorts. Vito clears the way for me to enter and then retains her position at the helm of my door. I’m sorry, her door.

The litter too has now grown up considerably. One of them has a lot of energy, the kind that needs immediate intervention. The other is more calm and composed. As if in waiting. He’s younger, but I have a feeling he’s going to be trouble pretty soon. 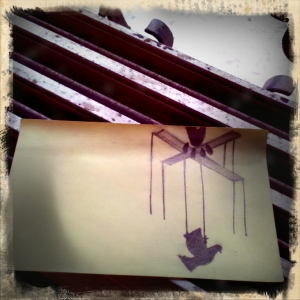